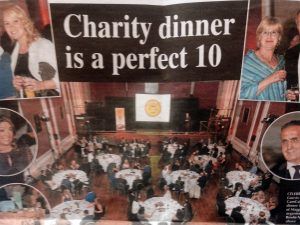 “Charity dinner is a perfect 10

GUESTS celebrated 10 years of a Cambridge taxi firm while raising cash for emergency medical charity Magpas at a gala dinner held at the Guildhall.

CamCab’s 10th anniversary dinner took place on Thursday night, with 120 diners enjoying a three-course meal and taking part in a charity auction. All proceeds from the evening will be donated Magpas to support its work with patients across the country and beyond.

“We were delighted to get so many people coming out to support Magpas, guests came from as far afield as Doha.” he said. “It’s the first time we’ve held such a big charity event, but we’ll definitely be doing another one. I’d like to thank everyone who helped organise the evening.” Mr. Nemer, who founded CamCab in 2005, has enjoyed a close relationship with Magpas since being introduced to the charity in 2012. The firm, which recently joined the network of Addison Lee, one of London’s largest private hire companies, offers free taxi travel to the Magpas Helimedix team when they find themselves stranded at Addenbrooke’s Hospital after treating patients.

Antonia Brickell, communications manager at Magpas, said: “On behalf of the Magpas, I would like to say a huge thank you to Rowhi Nemer and his team for choosing to raise lifesaving funds for the Magpas Air Ambulance, at the CamCab 10th Anniversary Charity Dinner. It was a wonderful evening with a great atmosphere, in beautiful surroundings.

“Over the past three years CamCab have been extremely supportive of the crucial service Magpas provides, as we continue to bring lifesaving care by land and air to patients in life-threatening situations.

“We would also like to thank everyone who helped to make the CamCab charity event a huge success and for their generosity during the night’s auction.”