Mihály Varga, Minister of National Economy handed  the Pro Turismo Awards that are considered as the Oscar Awards of the tourism industry to the owners of Mellow Mood Hotels – Sameer Hamdan és Zuhair Awad – in the Parliament on Thursday. 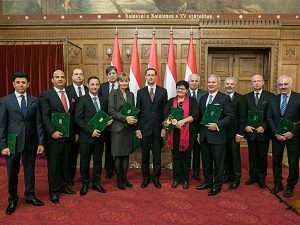 It is unquestionable that their hotel group has been the most dynamically developing touristic company in the last 15 years. The two businessmen came to Hungary only to study, but it became much more – now they can call this country their home.

In the beginning they started the business with youth hostels, and later on, they opened hotels in higher categories step by step. Over the years the portfolio has become more detailed and widely distributed, nowadays they have hotels in all star ratings. Even in the economic crisis, they were able to improve, and they could provide business opportunities for local companies, suppliers and workers – with which they could create hundreds of jobs.

They are proud of their effort of heritage preservation as well, the renovation of Klotild Palace and the just begun reconstruction of the Parisi Court serve as really good examples. They always focus on innovation and the training of their staff: they established the Mellow Mood Academy which ensures the resupply of leadership management. Last but not least we have to highlight their activity of social engagement and responsibility.