Jordan is a highly important partner of Hungary in the Middle-East – Viktor Orbán Prime Minister declared at the ceremonial opening of Buddha-Bar Hotel Budapest Klotild Palace. 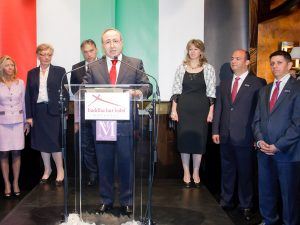 Budapest’s new, 102 rooms luxury hotel at the foot of Elizabeth Bridge was constructed by Mellow Mood Group, the company owned by Jordanian businessmen. At the opening ceremony, Viktor Orbán spoke about his government’s intention to open towards the Arab world. Speaking of relationship with Jordan, besides the preferred partner status, he also emphasized that the kingdom plays a strategic role in the Middle-East security processes.

Furthermore, gratifying that the Jordanian hotel investors respect the traditions and the local people, and they are concerned about giving job opportunities to Hungarians. This clearly shows – and the Arabians know that, and this is the reason the cooperation between them and Hungarians works well – that even the profit cannot be really pleasing, if it comes without any friendship or soul behind it – added the head of government. He noted he is always glad that foreigners can find business opportunities in this country besides Hungarians.

The Prime Minister thinks that the renovation of Klotild Palace could bring back the grandiosity of pre-communist Budapest. ’This investment could mean the beginning of a new era of success that is reminiscent of the old times splendor’ – he said.

Zaid Naffa, Honorary Consul of Jordan – reminding that the Hashemite Kingdom of Jordan is celebrating its 66th Anniversary of Independence, and conveying the king of Jordan’s regards – said in his speech, that Jordan also considers Hungary a serious strategic partner and a target for more and more investors and tourists from the Arab world. According to him, it’s because of the Hungarian government having opened towards them. He noted there are estimated five hotel openings in Budapest this year; three of them are going to be Mellow Mood operations.

Mellow Mood Group operates a dozen hotels in Buadapest at present. Sameer Hamdan and Zuhair Awad Jordanian businessmen were rewarded the Golden Cross of Merit of Hungary last Friday, a few days after Buddha-Bar Hotel Budapest’s opening, given by Németh Lászlóné Minister for National Development, as an appreciation of their everlasting activities in hotel development. Zaid Naffa, Honorary Consul of Jordan attended the ceremony.