The downtown of Budapest is full of „original” Hungarian restaurants, but it’s easy to confuse which one is a tourist trap, and which one offers the true wonders of Hungarian cuisine.

Fortunately most of the Hungarian dishes are easy to make, contain simple ingredients, and are very filling. These are just the perfect comfort foods! Let’s take a look at the most famous Hungarian foods, and what they’re made of! 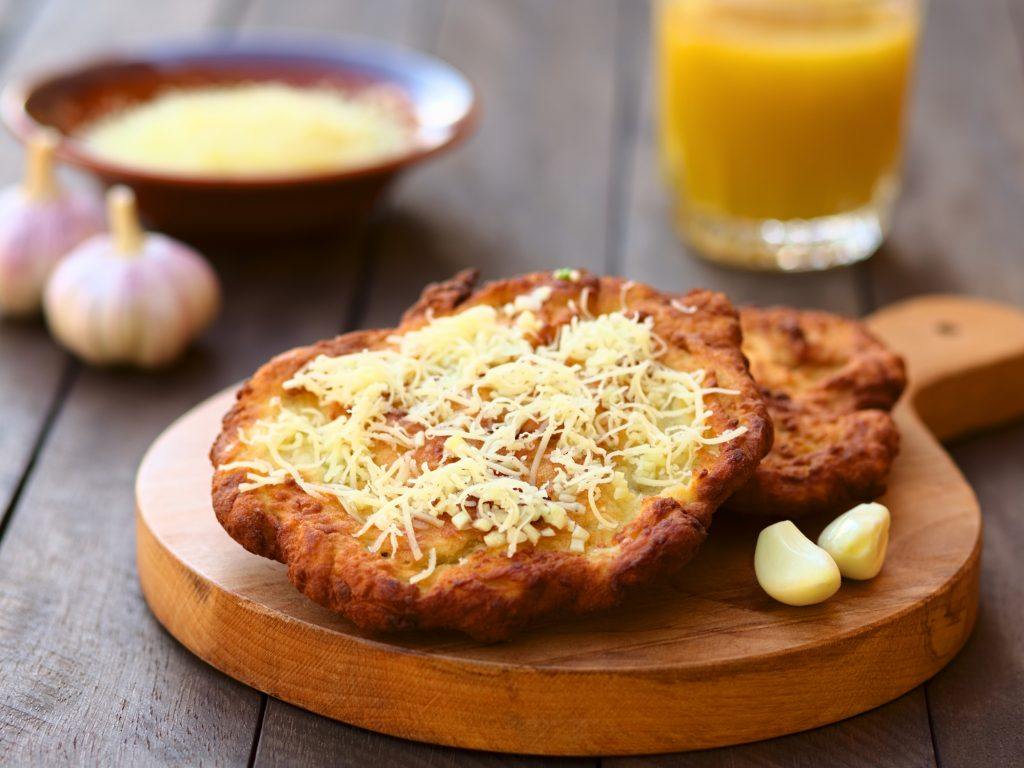 Lángos is one of the most popular dishes between tourists (and locals too). The savory dough is made from flour, yeast, milk and some salt. Once it’s knead together, we deep fry it just to spread some sour cream, garlic and cheese on top while it’s hot. It’s easy to make, but it might be a bit heavy for the stomach since it’s deepfried, but you’re not going to want to share this one! 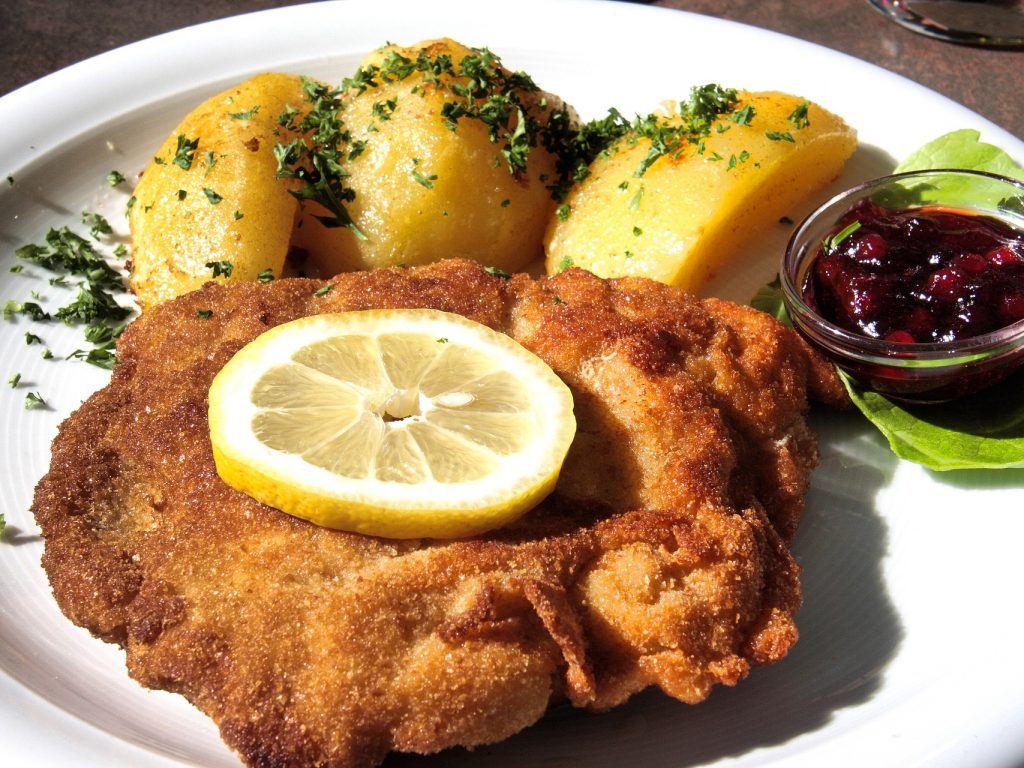 Rántott hús or Wienerschnitzel is originally made from veal, but today you can have it from basically any type of meat. You pound it until it’s thin, then cover it in flour, beaten eggs and breadcrumbs (in this particular order) to deep fry it. It’s good when it’s fresh, we eat it with rice, potatoes or some salad and pickles! 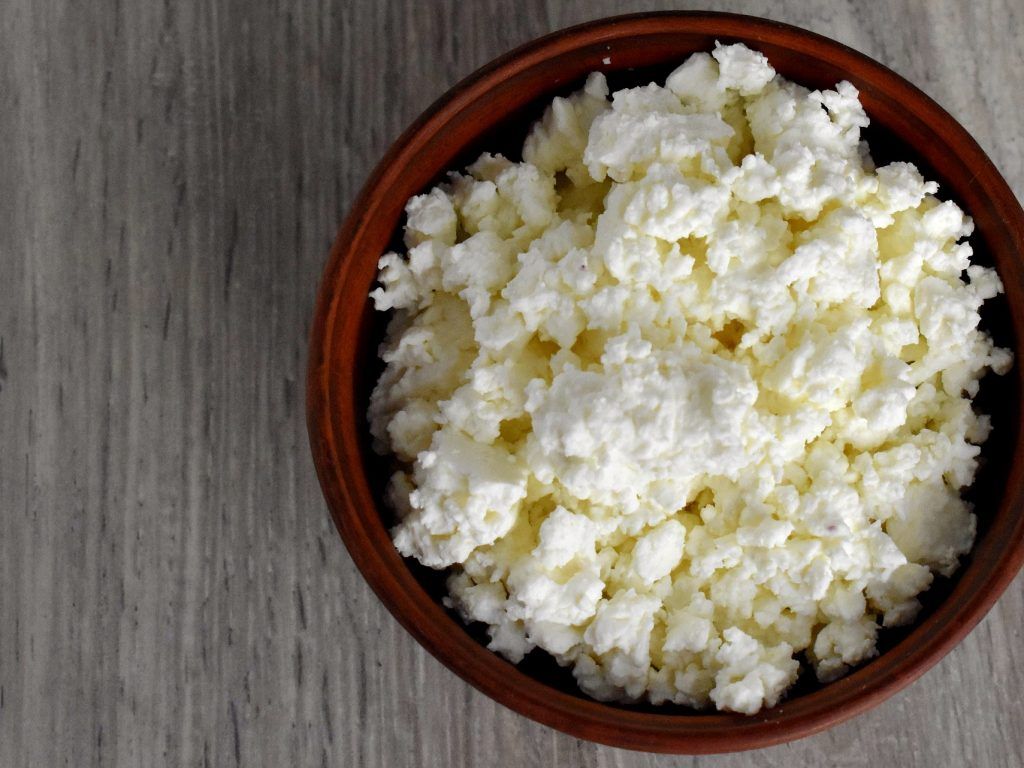 This is one of our pasta dishes, consisting of cottage cheese, sour cream, bacon, and pasta, all mixed together. We put this mixture in a baking pan, then fry it, so the top will be a little crispy. We can guarantee that you’ll leave a clean plate after this! 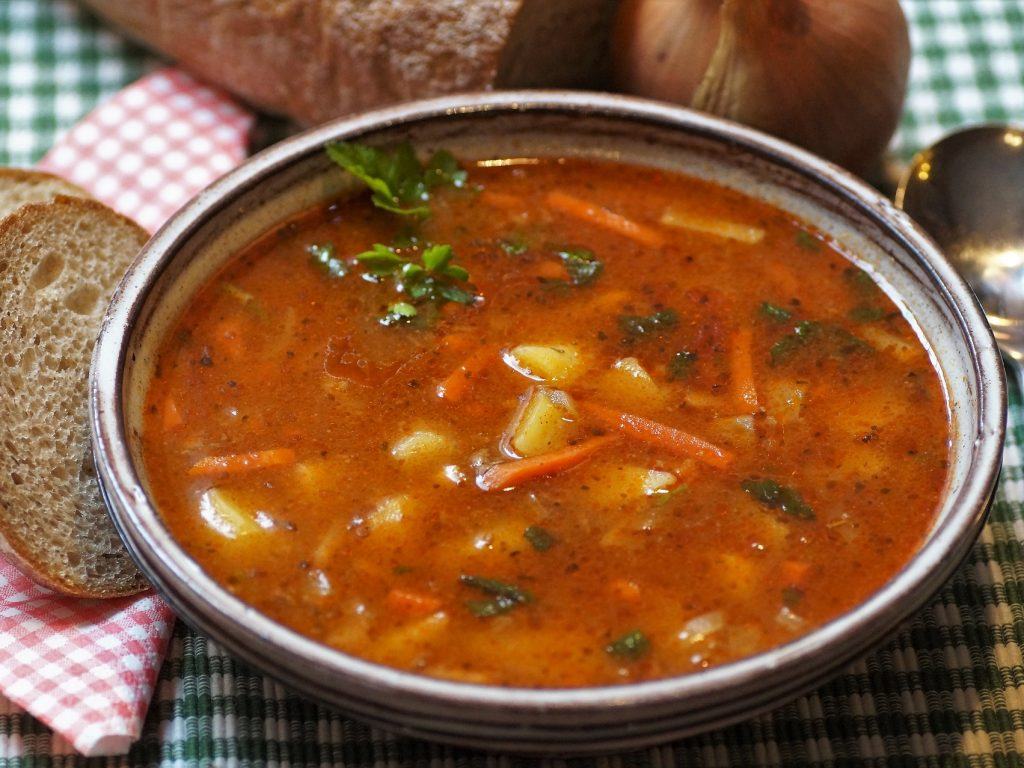 Maybe the most well-known Hungarian dish is the Gulyás, which can mean a bunch of things depending on where you order it worldwide. Originally, here, in Hungary it’s a slow-simmered thick beef soup with potatoes and vegetables, generously seasoned with paprika. It may take some time to cook everything in the pot, but it’s totally worth the wait! 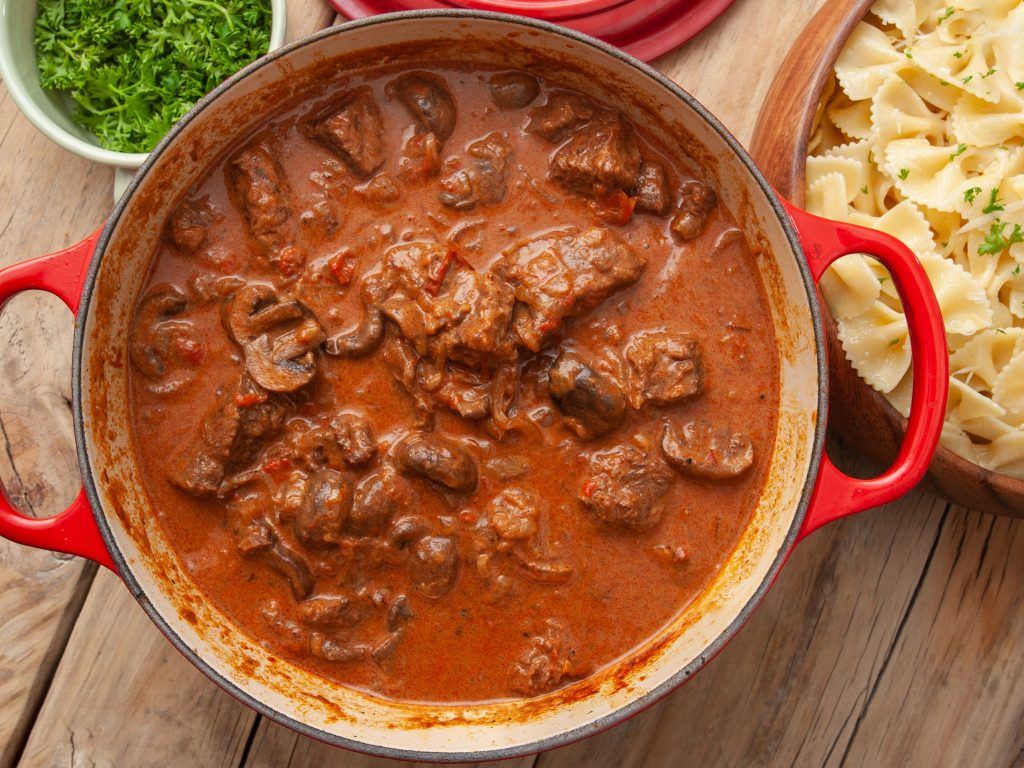 It is very similar to Gulyás, but not quite the same! Marhapörkölt, Hungarian for “beef stew”, is a prime example of how just a few simple ingredients can render the most delicious flavor.  The basic Hungarian pörkölt consists of onions sauteed in fat, meat and paprika slow-simmered in a little water and the result is fabulous. We eat it with dumplings and pickles, and it’s simply amazing. 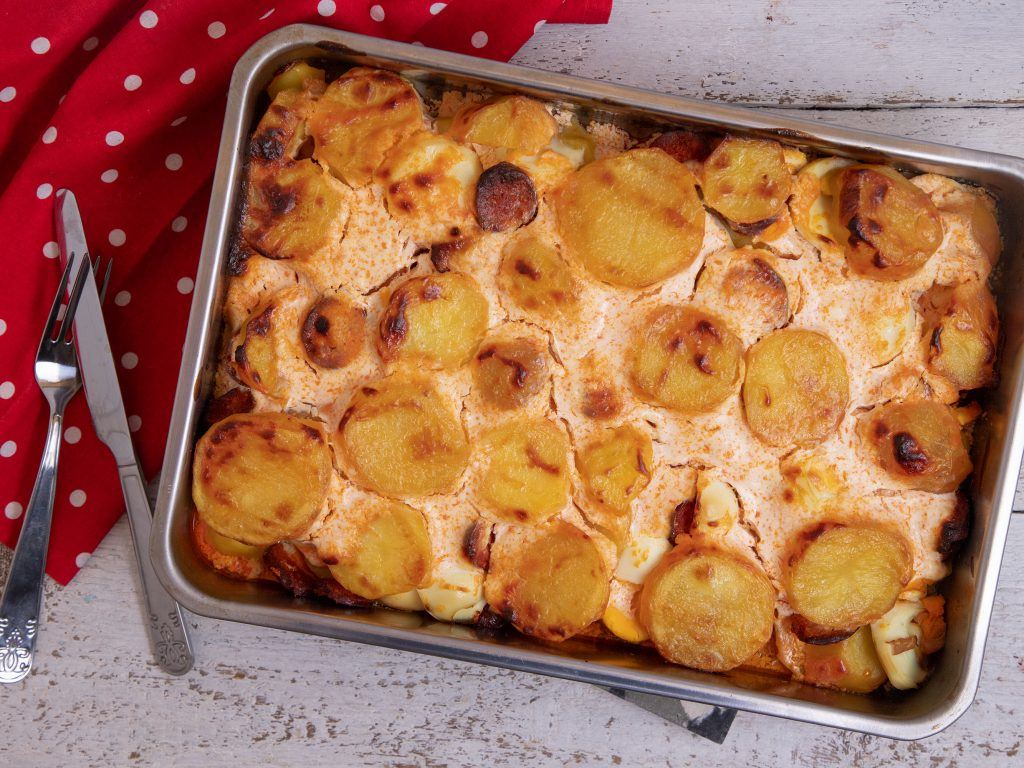 The Hungarian gratin-like potato dish is called rakott krumpli which means layered potatos, but it’s so much more than that! It takes a little preparation and cooking time, but the result will speak for itself. First you have to cook the potatos, slice them and put them in a baking tin. Then you’ll add some hard boiled eggs sliced, and finally some Hungarian sausages, and sour cream. We bake them together, for an hour, then its ready to go! Try it with gerkins or pickled beetroot on the side. 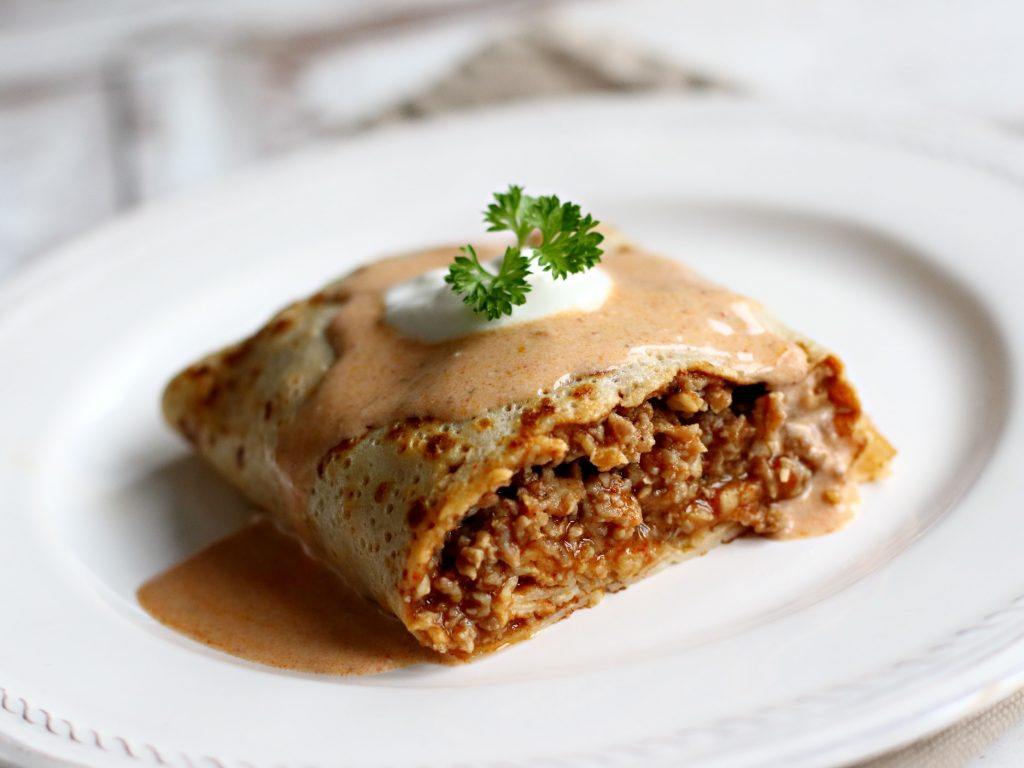 This dish is quite extraordinary: Hortobágyi palacsinta means savory stuffed crepes. You’ll need some kind of meat, onions, tomatoes, paprika and sour cream for the filling, eggs, flour and milk for the crepes, and it is topped with a sauce. The meat is sauteed with onions, tomatoes, paprika, and sour cream to form a stew. The sauce is drained from the meat before it is wrapped in the crepes. Flour and sour cream are whisked into the remaining sauce, poured over the filled crepes, and baked until bubbly.

If you don’t want to cook these at home, you can try them in one of these restaurants!